New Orleans, Part 1.
The train, “The Book”, and the Trinity.

As you know from THIS post, I recently took the Amtrak to New Orleans to vacation with my mother. The last time I took a long train ride like this was in 2004 when I went with my mom from PA to NYC after I graduated from college. So it had been a minute since I traveled this way.

The picture below doesn’t really do justice to JUST HOW WEIRD IT WAS to go at 2:30am to what seems like an abandoned train track and feel like it was either a murder in the making or an episode of candid camera. Big props to Mr. Smith for taking me there, staying with me, and not being too weirded out! After the boarding time came and went with NO TRAIN, I checked the Amtrak website and discovered the train was delayed by an hour. And sure enough, pretty much right at 4:15am, a GIANT train with at least ten cars stopped in Gastonia for just little ol me.

It felt straight up like the Knight Bus in Harry Potter. 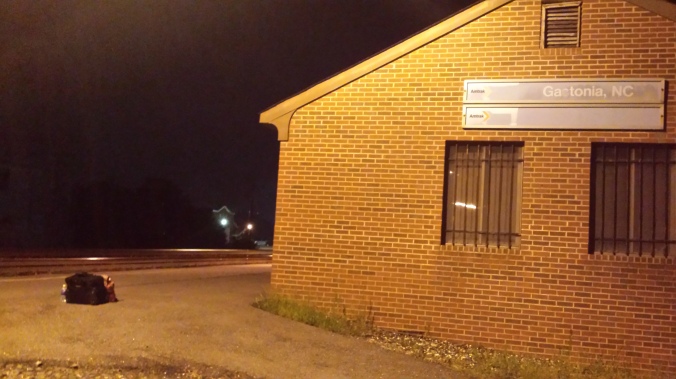 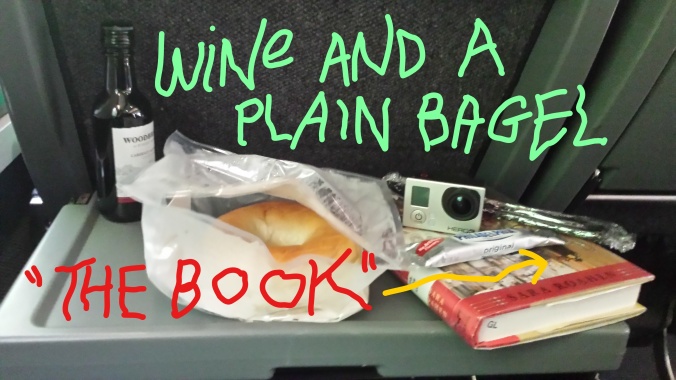 They were out of cheese pizza.

The train trip was AWESOME. I absolutely recommend traveling this way if you have some flexibility in your travel time (ie, don’t need to get somewhere in a short amount of time). The trip took about 17 hours (that went SO FAST) but would have taken at least 11 by plane (with the tickets that I could afford–one way tickets were over $400). The coach seats were VERY big and reclined way more than the 1.5 inches on a plane. The staff was really helpful and friendly. The bathrooms were a little gross, but so are most public bathrooms, right? I’m calling it $135 very well spent. When I travel this way again the only thing I will do differently is to pack some sneaky beverages of my own and more food from home. As long as you eat in your seat and not the dining car, they don’t mind you bringing your own noms. I’ll also check for delays before I leave home.

Let’s talk briefly about what has become known as “The Book.” This is not to be confused with “The Good Book”– it is a delightful love letter to the food and drink of New Orleans and the people who make it possible. I stumbled upon The Book on an end cap at the public library in Gastonia. The cover caught my eye and the book flap blurb sounded like it might be worth a read.

In all honesty, I get nervous about books that have to do with New Orleans, and really, Louisiana in general. Cliches abound and are both powerful and painful. The Book, Gumbo Tales ended up pleasing me in a way that only James Lee Burke has in recent years. My nerves quickly melted in to relief as I read and knew that author Sara Roahen “got it”. That’s all I will say about The Book besides that if you are a n00b or a native, Roahen is likely to show you some places that will make your face, taste-buds, and tummy smile.

Besides the obvious food & drinks, my favorite parts of New Orleans can be described as The Trinity. Graffiti, cats, and people are probably my other favorite things about New Orleans. They are everywhere and they are like no where else. Here are some pictures and snippets of The Trinity from this trip.

There were a few tags that my eye kept seeing all over town. While I didn’t get pictures of any of them they’re still worth a mention so you can look for them if you’re around. DUKY (while I wish it was pronounced “Duckie” like my cat, I imagine it’s “dookie” like Green Day but whatevs), REZNOR (again with the 90’s ref), ACHOO and READ. I’m not sure if it’s by the same person as the READ around town but you gotta check this out—–>  This piece is freaking huge–seriously, click here to see it.

Now for some I saw and documented!

I kept seeing these wonderful clusters of koi all over the Bywater. 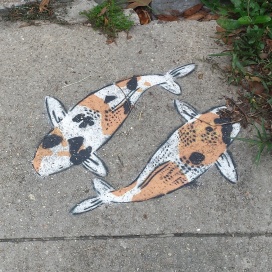 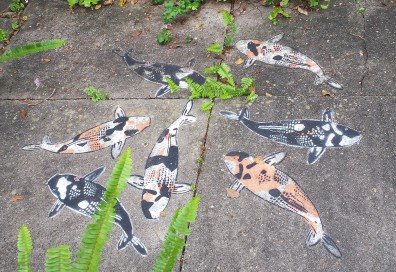 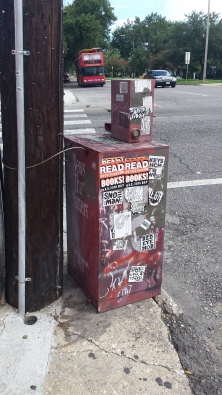 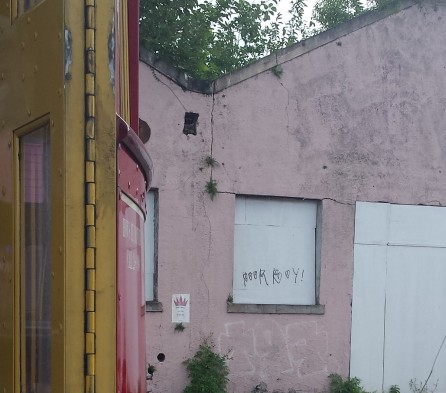 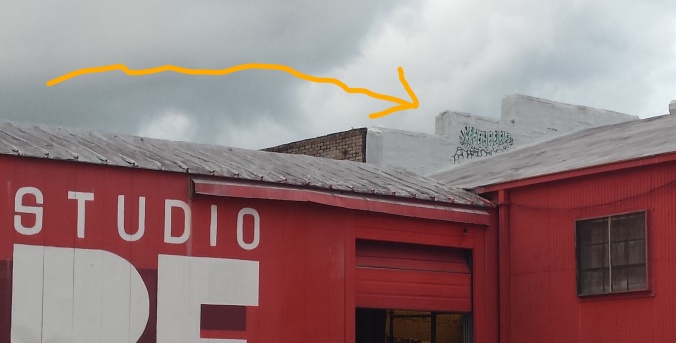 I know that is NOT a Horn Worm, but I totally thought it was at first glance :O 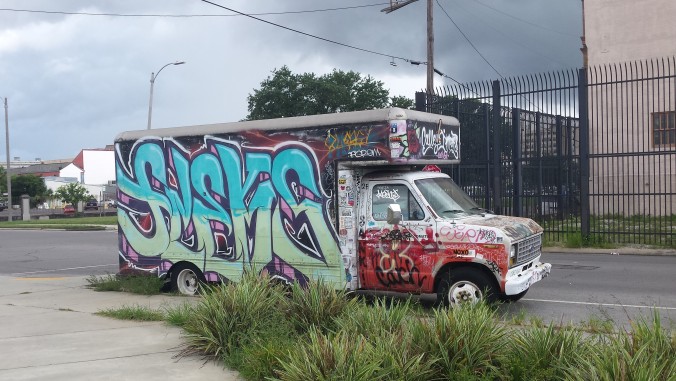 Y’all all know how much I love puds, and to be totally honest, I thought I’d end up bringing a batch of swamp kittens home with me. Mr. Smith better be glad I didn’t find any! Unfortunately, the pictures I got of the Bywater cats are pretty far away. These are definitely feral cats that wouldn’t let me get ANY closer. I gave them plenty of space and they seemed to enjoy being talked to.

While feral cats give me little bit of a sad attack, I was glad to see that in most of the groups I saw at least a few had notched ears (a sign on spay/neuter). If you don’t know much about TNR (Trap/Neuter/Realease) and feral populations you really gotta check out The Kitten Lady. She is one of my s-heroes and her outreach has helped me feel better about ferals.

I circled all the cats in yellow so you could find them! If you don’t see them in the circle it’s because they were behind posts. The red circle is a pile of leaf trash and not a cat 🙂 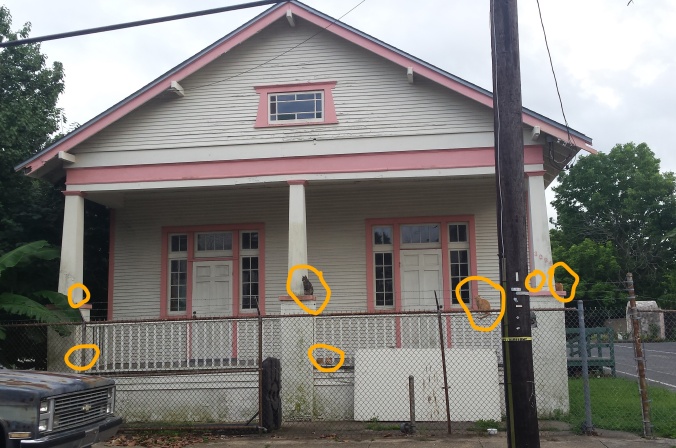 I DID get to pet this cat! Doesn’t she look like she could be Patti Smith’s sister? 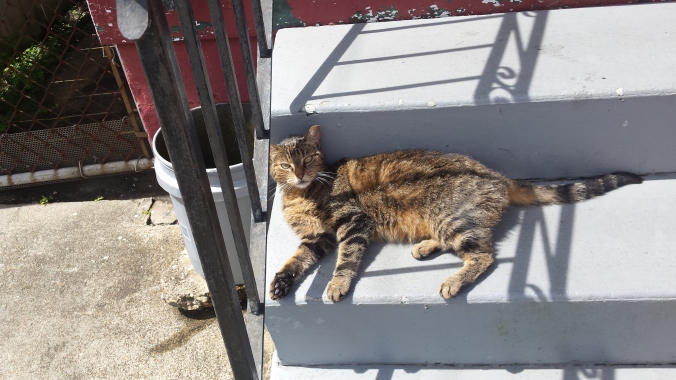 While I don’t take pictures of too many people, I do love the less obtrusive art of watching/hearing/seeing/smelling them. Not everyone is friendly all of the time, but most people are helpful, even the street car drivers. Once people can feel your affection for their city you are likely to be brought in to the fold–I won’t wax poetic about all that–if you know it, you know it. Speaking of, it was so good to see my old pal Hedges who is a transplant from Chicago but has been a tour guide down in the quarter for years.  Be sure to check him out here! He will let you in on lots of interesting facts AND the best places to eat and drink. You’ll want to put him on speed-dial…wait, is that even a thing anymore? Oh yeah, he also does plays. 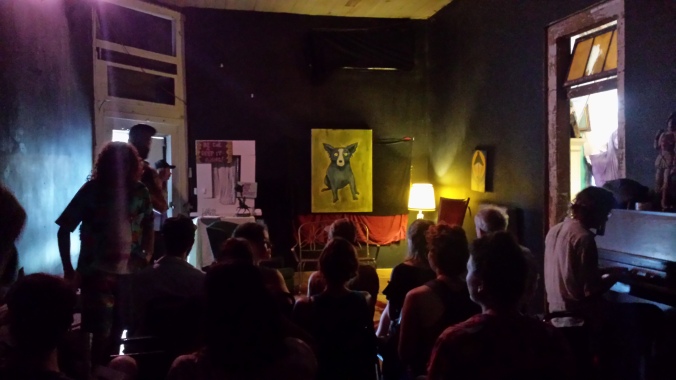 People filing in for the ‘Theater of the Absurd’ at The Mudlark. 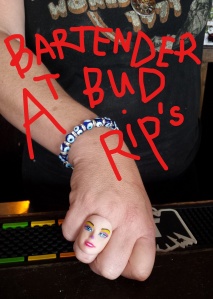 Stay tuned for the next installment of my New Orleans adventuring. I’m trying to convince my mom to do a guest post or two telling about her nearly month long adventure down there. What do you think? Wanna hear from her? Comment down below!

If you CLICK HERE you can see my Instagram account where I posted a BUNCH of pictures from the trip. I’m trying not to re-post the same stuff across all these accounts, so definitely go check out the stuff I have posted there.  Also, I am WORKING HARD at trying to edit a little movie of video footage I took so stay tuned for that, too!