This is the story of how another little kitten came to live with me and Patti Smith.

Here is the ruff lil scruff that was my ugly duckling. 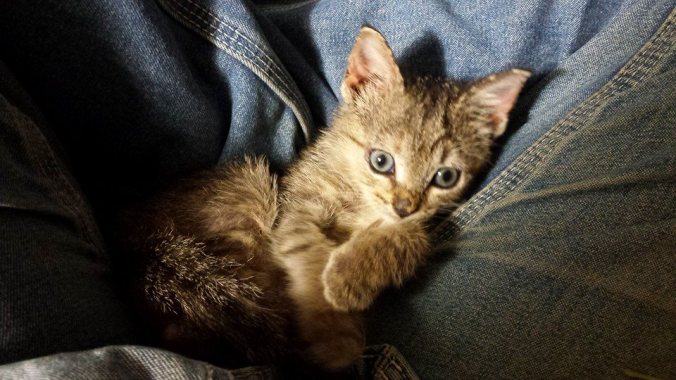 It was a Friday afternoon this past September when I got the hysterical call from my BFF and co-worker Violet. She was driving home from work on Highway 150 (a pretty busy connector highway for those of you not familiar with the area) when she saw something tiny and alive ON THE ROAD. Whatever the something was, it was right on the white line at the very edge of the asphalt. As her car whizzed past, she realized the something was a TINY KITTEN.

Vi whooped her lil red Fiat around in the middle of the busy road and rescued the scrawny little kitten. She looked around for other tiny kittens but she was all alone. At some point after the rescue operation Violet called me up at work. She was completely hysterical and she kept saying something about finding a kitten in the road and could she bring it to me. I thought she was talking about a dead kitten because she was crying so hard. I couldn’t figure out why she was trying to bring a dead kitten to my house!

Once I figured out that is was a LIVE kitten I agreed that she should bring it over. The little kitty was so completely scruffy and homely but it purred and purred and snuggled me super hard and of course I fell quickly in love. The next day, I took the sweet (but seriously mangy looking) creature to the vet for a thorough once over. Turns out the kitten was a girl, probably only three weeks old, and was healthy besides a very gnarly case of ringworm. While I was at the vet, the kitten decided her name would be Duck.

Late in the summer I had sort of been looking to get a kitten as a playmate for Patti Smith (see this post). It was around this time Violet’s grandmother, who was a total animal lover, passed away. Her grannie was her closest friend so it came as no surprise to Vi that in the weeks following her passing, some magical things happened. Vi had been wanting a rabbit as a pet, and low and behold, a rabbit ended up needing to get adopted. And not long after, we are sure that she put that kitten in the road for Violet to find for me.

I was holding the teeny purring kitten and said, “I sure am glad that Vi’s grannie made sure you didn’t get squished! Good job, Duck!” (Duck was her grandmother’s nickname) The kitten mewed right after I said ‘Duck’. I looked at her and said the word again. She mewed again. I said, “Is your name Duck?” She meowed loudly that time and began purring LOUDLY! And so it was. The kitten who had been saved by the spirit of Violet’s grandmother would be her namesake. 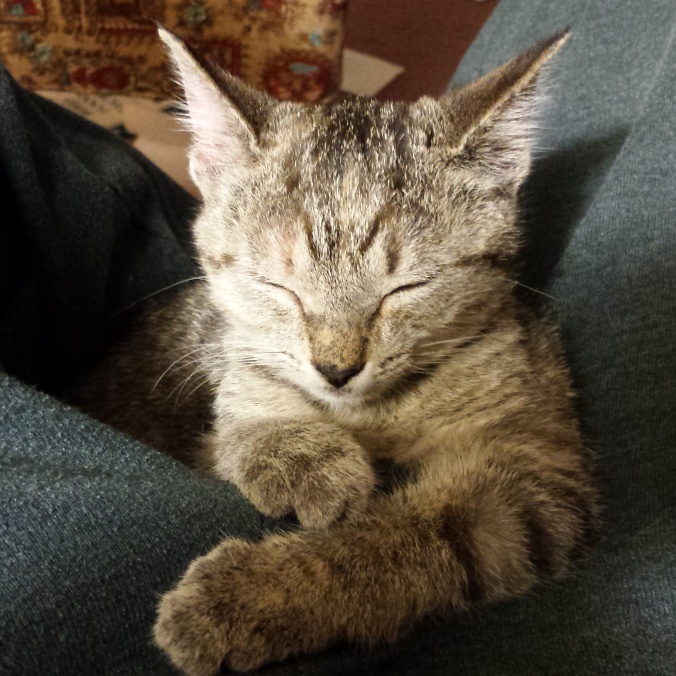 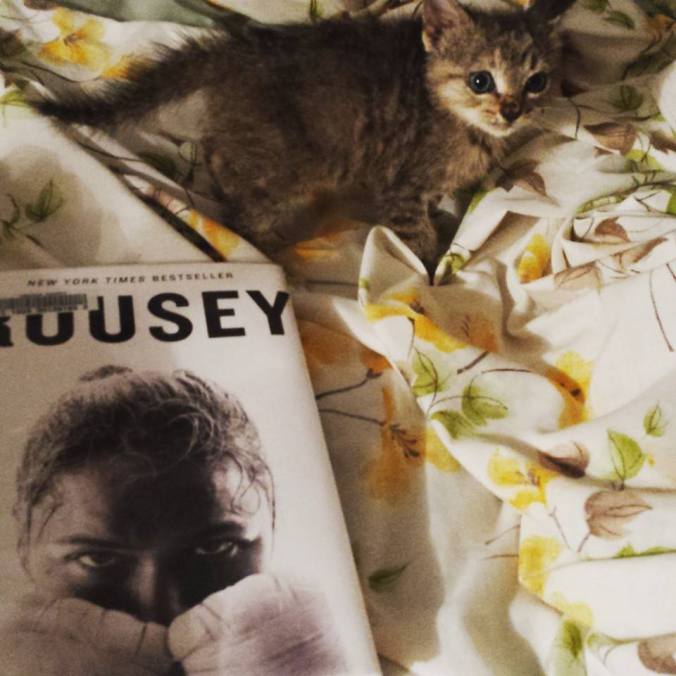 This is my favorite picture of Duck as a kitten. I had just started reading Ronda Rousey’s memoir a few days before Duck arrived and it became abundantly and immediately clear that Ronda would be her spirit animal.

I have never had such a mischievous kitten! Below is a picture of her next to one of my most prized possessions, my awesomely tacky touch lamp. Duckie figured out that she could touch it with her nose and make the light go on and off. She loved to practice this trick around 3am daily until I started unplugging it before bed. I think she thought it quit working because now I leave it plugged in and she doesn’t turn it off and on anymore.

A rare sighting of the girls snuggling. Pretty much the only thing that gets them this close together is my warm lap in a very cold house.

This is a far more typical lounging distance.

Patti and Duck have a pretty good time playing together and I think for the most part Patti likes having her around. They run and romp and hide and seek and attack and whine and growl and chase and eat and snuggle me together. Sometimes Patti gives me a look of desperation and I give her some extra attention and then all is well again. Life certainly wouldn’t be as entertaining with out Duckie. I guess she’s a keeper. 😉